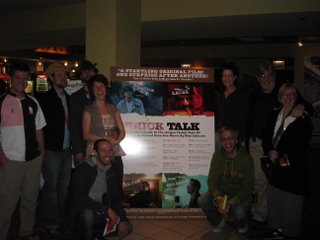 Tycelia and I saw "Brick" on Sunday evening. More in a bit. This is Nathan Johnson and the members of Cinematic Underground. Nathan did the score for the film. His cousin, Rian Johnson wrote and directed.

This is one of the most satisfying films I've seen in a long time and I can't recommend it too highly. To say it's a 40s film noir detective classic along the lines of "The Maltese Falcon" set in a modern-day So-Cal high school environment, is both accurate and misleading as hell. It is dead serious and incredibly quirky and fun to be with! Go see it. That's all. Then we'll talk.

Who would have thought that San Clemente would be famous for more than Richard Nixon's home away from home?
Posted by Larry Santoro at 6:10 AM

I plan to see this even if I go by myself. I'll be the one in the blood-spatted clown suit.

Is the whole title "Brick," or is it "Brick Talk" (like on the poster)? Is it a nationwide release?
Sorry to sound like a spacecase, but I'm not too hip on current cinematic offerings.
My most recent awareness encompasses "The Benchwarmers," primarily because one of the kids wants to see it. Geh.