I'm a word-omnivore. I'll read about anything I can put eyes to-- cereal boxes, toilet paper wrappers, the backs of old CTA transfers left in a pocket years earlier. I have a sneaking suspicion that I sometimes write a specifice something just to have an excuse to pore over books quaint and curious. Fact is, over the last few decades, research reading has become an obsession with me.

I write from the inside out...maybe I just postpone having to write for as long as possible or maybe I'm just a lazy sod who tells himself that reading is work. BUT...every time I write I butt into my own ignorance and find I've got to research something or another just to get my head and gut into the same place and get that place next to my characters.

For example: I recently, I shipped a novella for an upcoming anthology. The setting for the story, "Wind Shadows" is in the British trenches in Belgium during WW I. I knew what I wanted to say about the people in the tale. I knew roughly what the plot would ask them to do and what would happen to them, but the only clue I had to what their world was like from kidhood reads of "All Quiet on the Western Front" and seeing movies like "Paths of Glory."

By the time I finished "Wind Shadows," I had at least an academic understanding not only of how the whole debacle of trench warfare evolved during that conflict, but I came away with a gut appreciation of what a trench smelled like three days after a big push, I knew what sort of shit the troops got into when they rotated to the rear, I had some sense of the lives and routines of these men.

I'd have to go look at my "Wind Shadows" shelf, but I'd estimate that I read all or significant parts of about a dozen books in getting 15,000 or so words of story onto the screen. I cut a lot in subsequent and final passes, but the research reading had informed the shape and feel of the story. Hell, it's still there in subtext. 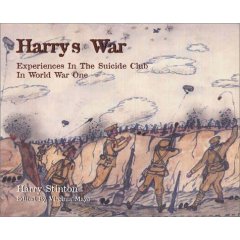 Research reading has become a staple of my morning and evening commutes. Even when I'm not working on a story, I find I'm drawn to books that most people have passed by. I love the dump-bins at bookstores, the last chance for some poor old things, nobody wants... Sometimes, passing by, something just pops. During the build for "Wind Shadows" for instance, a long skinny thing called "Harry's War: Experiences in the Suicide Club in World War One" caught my attention in a bin at Powell's in Hyde Park, Chicago. Filled with crude, hand colored sketches and trench-time jottings by a guy named Harry Stinton...just a bloke who was stuck out there figuring each day would probably be his last... "Harry's War," was a heady read -- I went through it twice for "Wind Shadows" and have since spent time with the pictures. There's more to this...but I have to run. Off to work, reading "Collapse: How Societies Choose to Succeed or Fail."
Posted by Larry Santoro at 6:29 AM

I think any vocation that entails reading interesting things in order to get the job done is a keeper.
Jealous.......

Hi Larry, it's Jamie Lawson from the WHC. I've been really enjoying your blog ... I love hearing people's personal stories.

I'll look forward to picking up the anthology containing "Wind Shadows" when it comes out -- the Great War has been a particular interest of mine for many years. I'll have to look at Powell's out here (Portland being the home of the original City of Books) and see if I can find a copy of "Harry's War" -- sounds like a massively cool book.

Hi Jamie...good to hear from you again. Hope all is well with you and Joe.

*taptaptap*
Larry? You in there?

Hi, Wayne! Haven't seen you around in a while, either. What's up with you two?