I wanted to let all 6 of you who frequent this place know that the benefit sale of my novella, LORD DICKENS'S DECLARATION, went very well at the British podcast site StarShipSofa (http://www.starshipsofa.com/). Thanks to a push by a large number of people in the genre community including Neil Gaiman, Corey Doctorow, John Scalzi, Poppy Z. Brite, Matthew Sanborn Smith and others, sales more than tripled the expectations of the StarShipSofa's editors.

I'm not arrogant enough to think it was because of me or the story -- of which I am proud -- but rather, the affection in which the Robinson's are held and the good-will of the Season. So, if you helped, thanks. I hope you enjoy the story and will stop back over to listen to it. The three-part audio epidsode is still available for free at the Starship. It begins on Aural Delight number 111 and goes through number 113.

On a separate note:I found out yesterday that my short story, THEN JUST A DREAM, was voted Best Short/Flash Fiction of the Year by the StarShipSofa in Great Britain. 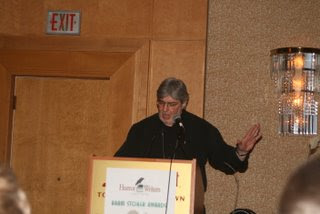 This is the piece that won the Flash Fiction Contest at the World Horror Convention in Toronto in 2007 -- the one Marty Mundt didn't enter -- so this is the DREAM's second award. Maybe I actually ought to try to sell it. That above? That's me, 50 pounds ago and reading, as they say, like a motherfucker to get THEN JUST A DREAM read under the time limit.

In added awards news, I tied with Spider Robinson for the StarShip's Best Narrator of the Year. Which amazes me. If you've never heard him, Spider is fantastic.

If you're interested by the way, you can still contribute to the Jeanne and Spider Robinson fund by going to the StarShip, scrolling down to the first episode of LORD DICKENS... and pretend you're going to buy it. You'll be directed!

Happy New Year, Happy End of the Decade. The picture below? Just a reminder of the Season that's slipping past and of the tree the cats knocked down last night. 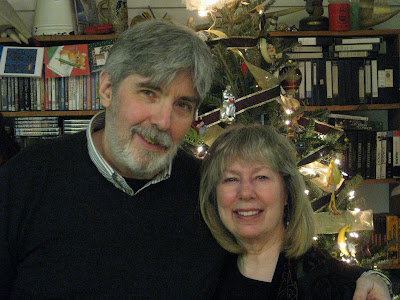