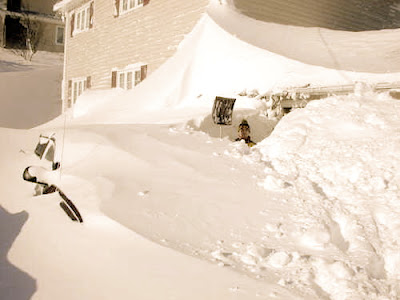 I wrote this story years and years ago. Then it was part of a novel that drifted away. It was published years ago in more or less the same form as you have it here. I posted it a year ago but I wanted to put it back up because I have a lot of affection for it. Except for my father not being killed in World War II, it's almost autobiographical. It's also almost biographical because my father's brother was seriously wounded in the War. Here it is. It's called...

A WORD FROM THE WORLD

The snow had started the day before. The sun was bright in a clear sky and it snowed! Each flake caught the sun. Sparkles swam in the air living along the wind. People passing on Cottage Street looked up to the clear air to let the cold colors hit them in the eye, or on the glasses. They smiled, admiring their shadows as they walked and the sunny, sunny snowstorm falling around them.
A genuine curiosity, Pop-pop called it.
Soon, though, the sky became gray and the snow continued into the dark. This was more like it. All that blew and rolled down streets, all the things that stood at corners, squatted in the back alley or at the bottom of the yard were, first, stopped, then pinned to the ground by the falling snow, then covered into smooth lumps.
It snowed all through supper and after. It snowed through the radio and Pop-pop's reading. It snowed even harder when I went to bed. All night, I'd wake and go to the window to wish for more; I pressed my face against the cold glass to peer at the sky above the eaves. I wanted there to be more snow in it. And there was. The sky was black but the air was lit by the streetlight at the end of the alley. Pieces of white day fell through the night and brushed little whiskers against the glass. I thought the wet chill would crack my cheek when I smiled.
In the morning the world was new. Yesterday's lumps were smooth and the spaces between them were even and white. In the yard, the snow had rolled in on waves of wind from over the far fence and dropped quietly and deeply. It filled the space from the back of the house to the alley, then buried the fence and the alley. Then it buried the Erby's fence across the way; then buried their yard, too. Then everything was all the same.
When the wind blew hard enough to make the electric pole by the corner sway and the wires clack and chatter their icy silver loads that had been building through the storm, Pop-pop looked up and down the alley. He shook his head. "We'd best stay in," he said. "All of us." Falling wires, he said. Careful, he said. Electrocution, he said.
Nanna looked into the pantry and shook her head. "The food'll never last," she said.
When the wind howled, the snow rose alive, spinning, and the world went white. So big a thing as Mount Amos disappeared. So too, did Aunt and Uncle Erby's house across the alley. Our yard began, now, at the back door and went on forever, around other houses and on forever. The world was just our place, just our house and the sweetly shaped mounds of snow stretching forever. A few black lines crossed above, or rose from it. A pole down the way. The very tips of the back fence, dead black morning glory vines still hanging in tatters from summer. Then nothing. The end of the world. Our place only.

I said once that by the time the telegram came, I already knew. Here's what happened. 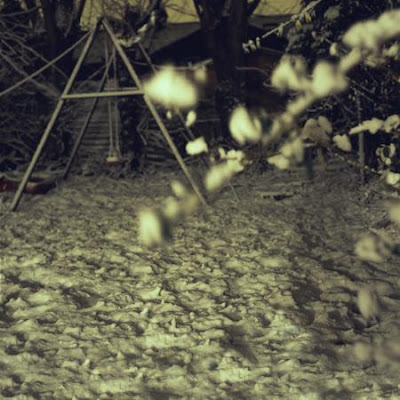