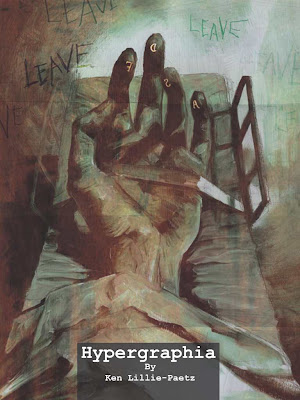 The image is from the publication, "The Uninvited, No. 1" The illustration is for the short story, "Hypergraphia" by Ken Lillie-Paetz, one of this year's nominees for the Horror Writers Association;s Bram Stoker Award for Short Fiction.

For the past two weeks, the podcast I host, Tales to Terrify, has been 'casting this year's short fiction Stoker nominees. The six stories were...

Well you can go to the site and find out yourselves. Listen to them. They were good... We finished up last Friday with Stephen King's "Herman Wouk Is Still Alive."

For our effort, we had an item in the News section of Stephen King’s website. The notice says:

“Herman Wouk is Still Alive on Tales To Terrify

"TalesToTerrify.com has posted a podcast that features readings of several nominees for the Bram Stoker Award for Superior Achievement in Short Fiction. Lawrence Santoro provides a fantastic reading of Stephen’s Herman Wouk is Still Alive at the 1 hour and 10 minute mark. Enjoy!

As mentioned, we played ALL of the Bram Stoker nominees in the Superior Achievement in Short Fiction category but there we have it.

Hope you'll stop by now and again, and again and again. There are big things coming.
Posted by Larry Santoro at 8:57 AM