WHERE DID IT COME FROM? 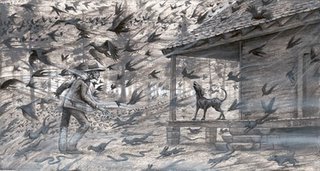 Alan M. Clark's illustration for "So Many Tiny Mouths" Alan's an incredible artist who will be doing the cover illustration for my first novel, "Just North of Nowhere," due out in late 2006 from Annihilation Press. Check out Alan's website at: http://www.ifdpublishing.com/

The post below was an afterword to my damn-near-Stoker-nominated story, "So Many Tiny Mouths" when it was published in Feral Fiction. Here it is:

"So Many Tiny Mouths," has fetchings.

Summers, the parents and I would hop into the old man’s green-over-cream ‘53 Belle-Air and head for pre-Trump Atlantic City. We’d make the Delaware crossing into Jersey on the Chester-Bridgeport Ferry and two hours later our first half-dozen layers of winter skin would be bubbling off as we yanked fillings out of our head with Steel Pier salt water taffy.

Whoa, whoa, whoa... Slow down. Before the shore, we had to get there. After that ferry crossing? Most of my kidhood, I spent those 70 non-air conditioned miles stuck in the back seat meditating on being ground under by Atlantic Ocean rollers or being impaled, barefooted, by my first horseshoe crab tail of summer?

It was only later I noticed that most of the trip was through trees; a corridor of trees.

Later still, I learned the whole of central Jersey was a damn geo-political entity: The Pine Barrens. The Barrens, so-called, was a land of trackless forest inhabited by strange six-fingered native folk who lived in caves in the wild wood, prayed to odd and grubby gods, who made their own gas from pig shit and sometimes ate lost travelers. Pineys, they called themselves.

Much later, I made a now long-gone documentary film about the region called “...Where the Sun Never Shines.” Sadly, while shooting the film I found Pineys to be normal, garden-variety Americans. Use your own personal demons to inform what image that conjures.

The people stay to themselves, they are independent-minded and don’t care to be fussed over. They do a lot for themselves that most of us gave up doing a generation or so ago and they have curious and spooky tales to tell.

The Piney’s world is deep evergreen forest and sand trails no wider than a small sedan; it is small streams and cedar swamps, it smells of sphagnum moss, decay and other forest things. Moving through this world, a stranger navigates by compass, odometer and a U.S. Geodetic Survey map. Chatsworth is real, the ‘Capital of the Pines.’ Ghost and Forgotten towns dot the maps. Places like Ong’s Hat and Hog Wallow do – did -- exist and someday I’ll do justice to the quiet, the sense of the old, the past, the never will-be that stands behind one who stands at one of those five-point crossings in the woods.

There are economic, political and social reasons why this area, despite being at the beating steel- and concrete-heart of the Megalopolis, has remained relatively green, human-free and “unimproved.” These reasons are not part of the tale of this tale’s fetchin’s, however.

Point is, I liked the Pines. I enjoyed meeting the people and managed, actually, to learn a little about them. I set one science fiction story, “Veterans,” there and, later -- on a roll of having sold two original screenplays, bing/bing, like that -- adapted it for film. “Veterans: the Movie” remains unproduced, unsold. Oh well.

The Pines is a hard area to get right. One truly GOOD writer I know of set a story there and I thought he missed it. One of the best episodes of HBO’s “The Sopranos” was called “The Barrens.” Their Jersey Wiseguys were money-on as strangers in a strange land, but not only did they not shoot it in the Pines, they set it in generic woodlands, a place without even a passing similarity to the Pines.

When I was asked to submit to an anthology of tales on a theme of fang and talon, somehow the Pines entered my head -- still bristling about that unproduced film, I guess. I kept thinking I wanted to do another story there. Okay. Two salient features of the Barrens are: pine trees and sand. Trees with talons might be interesting, but I opted to give the sand some teeth.

The anthology didn’t take the story. They were right not to. On the first pass, I focused the tale on the tourists from Philly. I was more comfortable, I guess, writing from the backseat of that ‘53 Chevy.

So, here’s my second Pine Barrens story, re-thought. I pulled off the road and listened to some of the people I half-way knew when I was making that documentary.

By the way, Earl Sooey, the coot through whose eye we watch the world end? He’s based on no one; just a fiction; a coincidence, really.
Posted by Larry Santoro at 2:26 PM No comments:

One Year and a Little More...

One year and a little more since my last post.

Several things: I almost got another Stoker nomination. I didn’t get the nomination but the story, “So Many Tiny Mouths,” did get an honorable mention in Ellen Datlow’s YEAR’S BEST HORROR AND FANTASY anthology. A pretty good little tale, if I do say so: a pleasant little end-of-the-world tale set in the Pine Barrens of New Jersey – one of my favorite places. I spent months there back in the late 60s doing a documentary film. More about that, anon.

The near-Stoker thing got me an invitation to submit a story to an anthology-to-be of zombie stories.

Now, I can’t recall having actually read, much less written, a zombie story. I did have a few friends back in Pennsylvania who’d been living-dead extras in George Romero’s low-budget, albeit groundbreaking original “Night of the Living Dead.” I had actually seen the film -- and, with help, was to pick out some of my pals lurking under the prosthetics and makeup.

Point being: Zombie is a genre I neither know nor embrace.

Oh...right...I’d also seen the re-do of “Night...” which co-starred another friend, Tom Towles, from my Organic Theater days...and, now that I’m on the subject, I do remember having seen “I Walked with a Zombie,” but that hardly counts...

Back on track: I said, “yes.” Of course I did! How often does a previous and near-miss Stoker nominee get asked?

At first I thought I’d set it in Bluffton. I didn’t – more about that at another time!

I didn’t because something buzzed in me. I was on a Sunday afternoon skim of Powell’s Bookstore on 57th, by the University of Chicago, and found an intriguingly titled and arrestingly laid-out book, “Harry's War, Experiences In The 'Suicide Club' In World War One.” “Harry’s War...” was an oblong thing, a facsimile of a diary, with color sketches by the diarist, about life in the trenches. It tweaked something. I flashed on Mr. Boyer’s world history classes at Reading Senior High. The memories prodded research. I dove into World War I history, tunneling and mining strategy, walking tours of the front, pre-Second World War German mysticism. It went on. Norman Boyer would have been proud! A dozen books later, I wrote “Wind Shadows,” a zombie tale utterly without mention of the word!

Another thing: One of my vile stories, a trunk tale called “Little Girl Down the Way,” has become a Twilight Tales podcast. It’s at http://www.twilighttales.com/podcast/ That’s not me reading it, but the TT podcast host, David Munger, does a pretty good job with a damn difficult piece. Hope you’ll listen.

This is getting to be too long and meandering but it has been over a year.