For those who like Crumhorns and Shawn, Dufay Collective is good... and a brief update on LORD DICKENS...

No reason for this, I just thought it would be nice to have some decent music playing while you read or look or do whatever you do when you stop by.


If you want something else...just make a selection.

Oh, by the way, the proofing is done. I've written the first of the two "Previously on..." introductions to LORD DICKENS... I'll record it tomorrow.

Okay. It's finished. More or less. More on that later.

What is: it's sent. More or less. The words, they're in other hands. Dee Cunniffe in Ireland has the RTF and is doing the layout. 22,879 words.

Tony Smith in the north of England -- somewhere near Scotland, somewhere near the channel between Europe and Blighty -- has the first third of the audio. That goes up on the StarShip December 2.

The audio is in the can and mostly edited. Episode One (of three) is what Tony's got. It's done. I'm still fussing with fragments of seconds on two and three. Part One 'casts at 1 hour, 11 minutes and 30 seconds. Part Two is roughly 45 minutes. Part Three, about 1 hour, 5.

Somewhere in the Carolinas, Skeet Scienski is driving himself blind and breathless to finish the art. I saw one of the plates late last night. Lovely. Moody. An atmospheric morning duel, shadows by a misty river. The image caught perfectly the moment in the story that it illustrates. He's fussing with a minor change. Still...it's wondrous. 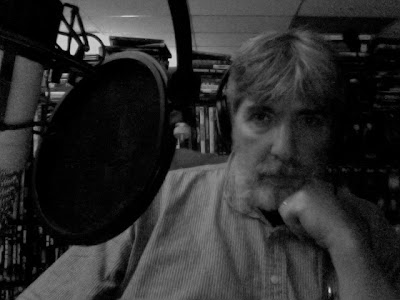 What is not yet: I've still got to do a couple of "Previously on LORD DICKENS'S DECLARATION" lead-ins to Eps. Two and Three. The one for Two is written but hasn't been recorded. Bugger Three for now. It's Thanksgiving.
Posted by Larry Santoro at 9:23 PM No comments: