An evolving novel set in the LOST universe 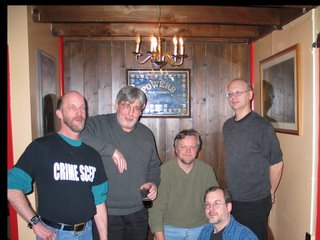 Four of the LOST: FAITH authors in Chicago: L-R Wayne Allen Sallee, Lawrence Santoro, Roger Dale Trexler, Martin Mundt. Below, the late John Eveson, an author in life, a character in death...killed in the second episode, remembered in the sixth.


This is an unashamed pitch for attention.

During the December/January hiatus of ABC TV's monster hit, LOST, one of the show's websites, "The Tailsection," began posting an evolving novel, LOST: FAITH.

Set on the island, the events of LOST: FAITH take place before the crash of Oceanic 815. According to the creators of the storyline, "The idea was to craft a mythology connected to the show's locale but outside the events of the ABC program."

It is September 11th, 2001. News of the terrorist attacks in the United States reaches the passengers aboard Pacific Blue flight 442 en-route to the US from Thailand. The flight continues as a fissure of fear, rage, and paranoia opens. Soon, the unthinkable happens...

LOST: FAITH is a collaborative project among several writers. Each author is crafting a character and an 'episode' of varying lengths.

I am pleased to be one of those writers.

My character, Maxwell Peter Donnithorne, is a world-class concert flutist who was returning to the United States from a cross-cultural seminar in Bali. Recovering gradually from the shock of the crash and his injuries, Max believes himself to have been a person apart from the mass hysteria onboard flight 442 which precipitated the crash. Gradually, he comes to realize that the island will not let him be alone here -- not even in his own skin.

Veteran horror author Wayne Allen Sallee is one of the creators of the series, a contributor and is acting as story supervisor. Other writers include Roger Trexler, Sidney Williams and Jon Lachonis.

I hope you'll stop by LOST: FAITH and have a read. It's at: http://www.thetailsection.com/lost_faith/downloads.html
Posted by Larry Santoro at 9:51 AM