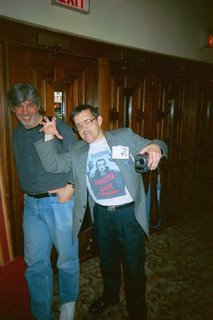 Too good to pass up...thanks Wayne.

The photo was taken at a little film festival in Chicago in 2004 and Mr. Wood-be was still calling himself that. Ah well.

Wayne Allen Sallee took the picture. Later that evening, Wayne found himself in a hot tub with two Hollywood stars!
Posted by Larry Santoro at 4:34 PM