A DARK AND DEADLY VALLEY

My Bluffton collection, "Just North of Nowhere," is due out from Annihilation Press about then. So, too, I'm now told is my longish short story (do I do anything but?) "At Angels Sixteen" in the Mike Heffernan-edited A DARK AND DEADLY VALLEY. (Brownie points for anyone who can identify the source of that title without looking it up! ) 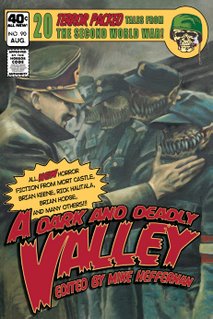 You've probably sussed the fact that ADDV is a collection of stories set in and around World War II. My contribution, "At Angels Sixteen," is a story I wrote about 8 years ago (and, typically, never tried to sell). The central character is the tail gunner in a B-17 Flying Fortress who encounters more than flak and the Luftwaffe in the skies over Germany!

Mike's put together an incredible line-up of talent for this book and I'm honored to be part of it. Take a look:

"After Dunkirk" by T.M Wright
"The Coventry Boy" by Graham Joyce
"The Honor Guard" by Paul Finch
"In the Dark and the Deep" by Steve Vernon
"Simple Equations" by Jeremy Robert Johnson
"The Night is an Ally" by Scott Nicholson
"Come Unto Me" by Elizabeth Massie
"And the Worm Shall Feed" by Harry Shannon
"At Angels Sixteen" by my own self, Lawrence Santoro
"The Black Wave" by Brian Keene
"And They Will Come in the Hour of Our Greatest Need" by Brian Hodge
"The Devil's Platoon" by John Everson
"Sturm und Drang" by Bev Vincent
"Hiroshima Falling" by Weston Ochse
"Doorway to the Sky" by Cody Goodfellow
"A Judgment Call for Judgment Day" by Scott Edelman
"Blossoms in the Wind" by Rick Hautala
"The Gypsy Camp" by Mort Castle
"Warbirds" by David J. Schow
"But Somewhere I Shall Wake" by Gary A. Braunbeck

Stop by this site: http://www.silverthought.com/preddv.html or click on the title above the post and check it out...
I'm told that books like this get snapped up by collectors like/THAT! So order early!
Posted by Larry Santoro at 10:37 AM

i am writing this from work. at the moment i am printing out 4800 pages of a math booklet for a school in the bronx.

of your you know who this is. the golden age hourman. or possibly the scarlet corgi, but not the one from 1966. blame that one on marty.

now i am printing 4500 copies of something called nia and her magic quarter. ah, the lush life...

And this, a month later, is the real me. Awaiting the WWII book. Seeya.