I’m not a brief guy. I take my time developing character, situation. I like to give a story resonance and, what’ll we call it? Aroma, texture, sound. You know?

A joke among my friends is that my titles are longer than some people’s stories: “God Screamed and Screamed, Then I Ate Him.” “’What Do You Know of the Land of Death?’ Clown Said One Night to the Haunted Boy.” “She Was Washing Her Frock When Winston Churchill Came Galloping Out of the Mist.”

That last one got cut down to “Children, Invisible, Watching from the Great Darkness,” but you get the idea.

Not surprisingly, I’m not much for “flash fiction” – short tales, typically begun developed and ended in 500-700 words.

I never intended to enter the flash fiction competition at this year’s World Horror Convention in Toronto. I went to hear some of my friends read. While slicking my hair and tucking my shirt in the room just before the event, though, I remembered a little thing I’d written a year or so ago, one of those things that nudges you when you’re doing something else and you have to put it down. I popped open the computer, dug through the electrons and there it was… 1,246 words titled, “Then, Just Dreaming…” I read it. More than five minutes – the contest limits readers to five minutes and not a heartbeat longer.

I trimmed it…read it again. Still over. Trimmed some more – it wasn’t hard – even at 1,200 words, the story had some flab. I printed it. Went down to the lobby. Read it. Crossed out a few more words then let it go. You can’t do flash fiction, Larry! Hell no. Peter Crowther was judging! So was Ed Bryant. Peter, Ed and Nancy Kilpatrick! Christ no.

I stuck the four pages in my pocket and went in to hear my friends read.

Other chums saw me there.

Chums chuckled. “Santoro at a flash fiction contest!” Big laugh. “No, no,” I say. “I’m just here to watch.”

I sit. My name is called. I get up. The assembled audients call out the traditional starting signal: 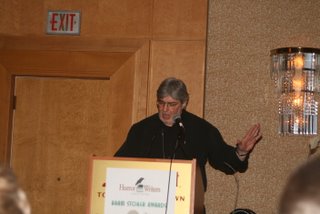 I read like a motherfucker. It is not that I motormouth the tale, I just keep it brisk. I begin quickly because I know near the end there’s a moment when I need a some dead air to give the following some weight. So I establish a pace quick enought to make even a short pause seem like a deathwatch. Later beats lend themselves to breathless rushing. There I do read like a motherfucker.

I make one verbal stumble somewhere along the way, but I keep going.

I speak the tale’s final word (for the record, that word is "Goddamn...!") just as the timekeeper puts his hand on my shoulder. I am in, out and under five by less than a second.

The judges retire to confer. We drink and giggle.

I do not take third place– the spot I half-way hoped for because there had been some really good writer/readers! I do not take second. I’m done.

I do take first place.

The world is turvy, topsy-wise. We’ve fallen into another version of the Big All.

The prize? Braggin rights, basically. But I am pleased and honored so here I am: Bragging.

I read like a motherfucker.
Posted by Larry Santoro at 3:55 PM

hmnnn. 8 minutes, or close to...but hell, you would have won, regardless. anytime marty is not in the room, you shine the brightest. sometimes even when you both are there. wonder if they have flash fiction contests in flint?

Anonymous said...
This comment has been removed by a blog administrator.
1:21 PM

8 minutes? Nah. But thanks for the "even when you both are there" comment, Marty-wise.

Halo, dear Larry.
That's i, Misha fro Russia:)
Well, i think that is very good picture. I don't know how to say it in english... - you look like an acter at the scene place of our Big Theatre :)
Take my Congratulations.
P. S.: Translation (of interview) going well, i'll think that this interview will be posted soon, about 2-3 weeks.

I really enjoyed hearing you read at WHC2006; I'm sure sorry I missed out on this one.