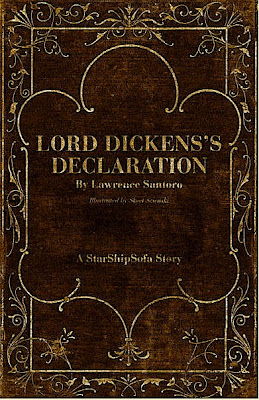 I've just completed the text for the "Previously on..." introduction to the conclusion of LORD DICKENS'S DECLARATION. I'll record it tomorrow. That leaves only a polish edit of the episode itself and, perhaps, a final -- and very SHORT -- narrative at the end.

I've got to let this thing go. Let it be by itself for a while. Look at it again six months from now, a year... I do my best re-work that way. Anyway. I did a little colorization to the cover image. Just because.

Hope you're all going to the StarShip and that you're buying copies of the thing and that you're not just paying the minimum 2 pounds 99. Bump it up. Pay 10, 20 quid for it. Go on. It's Christmas.
Posted by Larry Santoro at 11:48 PM

Hey, Larry! I got the first "copy" of LORD DICKENS'S DECLARATION!!! I'm so proud! I look forward to hearing your certain-to-be masterful narration of it on SSS. Thank you for writing it!

Hey Larry - LOVING the story and your narration on SSS. The images of the vast Beast spreading out over Salisbury are particularly cool. Looking forward to the end - and I'll be buying a digital copy after I hear you narrate it !