As Seen on TV

I’m not a fisherman. My father, was. In that way that people with passion have of viewing their personal joys, he would take me, holidays and birthdays, to some river or lake and sit me down, bank or boat, and get me to be quiet, observant of water and the signs of fish. I accepted his efforts in the spirit which he offered them. They were generosity. He was giving something of himself.

Later - much later - I was watching something on late night television. As a constant, interrupting every 12 minutes, was Ron Popeil. Among other things, he was hawking his dad’s invention, the Popeil Pocket Fisherman, an item at the time I thought was about the niftiest thing I’d ever seen. I was still young, and this was a long-ago part of the old century and there were few marvels abroad in the world. 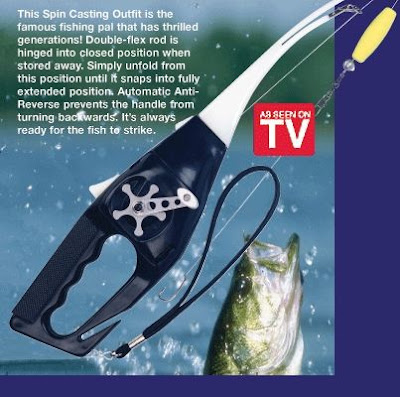 Okay? I hated commercials that interrupted “Citizen Kane," “Rocketship X-M” and whatever else kept me close to that dream-state young American males of the 60s seemed to pull over them like a blanket in the after-midnight of the heart. Still…that thing, the little thing you could stick in the glove compartment and which took the place of the whole trunkload and backseatful of stuff my dad and I trundled and packed before setting forth on what I knew would be a long day of bobbing and sweating and silence…even if we were just heading up to Antietam Reservoir. Well, that was worth a few minutes. 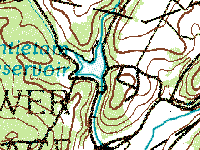 Later, when I reached the age of being a fully realized self-seeking smug American male, I thought, “why not just tell him? Say, ‘I don’t like fishing.’ There it is.” I didn’t. And, by then, he was no longer insisting I go with him.

Later still, I was glad that I hadn’t. I would have missed having to sit in a boat or on a bank, the silence and the seeking for fish signs with my dad, whom I wouldn’t have for too many more years. The Pocket Fisherman? I bought one. Not from a late night pitch by Ron on behalf of his dad’s invention. I found one at a yard sale. Bought it. Loved it. Used it to cast lead sinkers in the yard. I got good. I had it for years. I never fished with it. Finally, it was beautiful. And it represented the bright edge of a long-remembered gift from my father.
Posted by Larry Santoro at 12:36 PM

Anonymous said...
This comment has been removed by a blog administrator.
4:35 AM

Come home Larry the woods are calling ya