StarShipSofa Wins a Hugo AND Publishes Another Book!

Egad. Two posts in as many weeks. This one's here because I wanted to call everyone's attention to the publication of the HUGO AWARD-WINNING StarShipSofa's second "Best-Of" volume of stories. 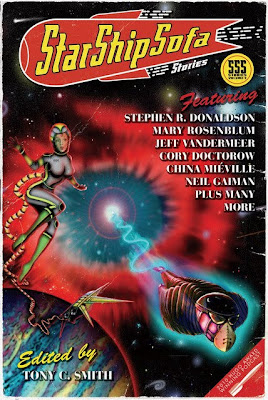 Number 2 comes out in the wake of last week's win of the Hugo.

I'm pimping the book not only to give plaudits to Tony, Dee, and the rest of the crew of the StarShip but also because I'm pleased as hell to have a story in there. My contribution, "Then, Just a Dream," is an odd little number. It's one of those things you jot down almost as fast as it takes to type it, then put it aside and forget about it until something prompts you to dig it up and take another look.

Since that dig, it's won first prize in the flash fiction contest at World Horror Convention in Toronto and last year it picked up the StarShip's best short fiction award after being podcast on the site.

It's a genuine honor to be in the same collection as Neil and China and Stephen R. Donaldson but maybe I should change my pen-name to Many More.
Posted by Larry Santoro at 6:55 AM