During this year, Amazon tells us, sales of e-books surpassed those of the ink-on-paper variety. I still prefer to hold a real paper and ink book in my hands. I prefer the smell of them, the heft of them. I like going into the shops of quiet little people who sell books because they love the bookish life. Ah well. I succumb. As my collection, DRINK FOR THE THIRST TO COME nears its release date -- June, 2011 -- my first novel, 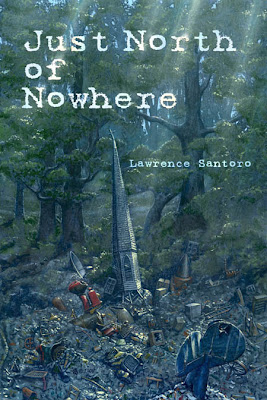 JUST NORTH OF NOWHERE, will be re-released on Kindle, iBook and other such platforms.

This edition will be expanded by about 10 thousand words and will include several chapters specially written for the release. It will be priced in the 5 to 6 dollar range. I hope you buy it, hope you enjoy it. At least you'll be able to read it in the dark -- on the iPad and iPhone anyway.

Have a look at the video Dave Fell and I made in 2007 for the initial release of the print book from Annihilation Press.

Posted by Larry Santoro at 9:45 AM

Thank you for a awesome article.You have given me some ideas and a different way to to write articles.