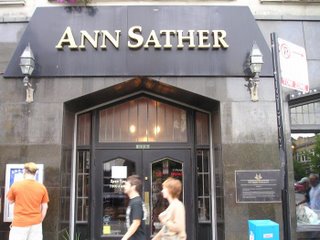 Ann Sather's. A lovely Swedish restaurant, that began life in the 1940s as a coffee shop owned by, well, an old Swedish woman. The first location was in a space that eventually became a pet store that specialized in rats, snakes, bugs and spiders.

Sather's moved two doors west just after I moved to Chicago. It's now in classy digs -- a former funeral home with a polished black granite exterior.

And the spider shop? The owners, drug dealers on the side, vanished one weekend after opening their cages and setting free the creepy, crawly and squirmy.

But Sathers...Sathers is where Tycelia and I had our reception. Great Scandanavian grub -- Tycelia's half Swedish -- and world-class sweet rolls!
Posted by Larry Santoro at 6:20 AM

Looks like a classy joint... you know, for supposedly having Swedish blood somewhere in the misty annals of time, I don't know that I've ever even laid eyes on Swedish food. How's that for weird?