Thank you for wondering! I’m back.

I’ve mentioned somewhere in here that I sometimes write horror and not just contemporary fantasy. When I become pissed at something or someone, when an event or person really grabs and twists my Forevers, when the world just starts crowding me, I sometimes crank out one of my “vile tales” – literally as fast as it takes to type them.

“Little Girl Down the Way” is one -- you can hear that podcast on the Twilight Tales website (http://www.twilighttales.com/podcast/). “Catching” is another (available in the anthology, SEX CRIMES, at disreputable booksellers, everywhere)...stories that arose, fully vented, out of pique, disgust, anger and all those more noble urges we human critters experience from time to time. Some people get drunk or beat their cats. I write. I’m too old to drink without severe next-day agony and my cat’s too old to take a thrumping. Besides, I like him.

So, here I am: just returned from the 2006 World Horror Convention in San Francisco. Typically, World Horror (WHC) is not my favorite genre con – that would be NECon (more on that anon), held yearly in Rhode Island. Fact is, I generally feel about an upcoming WHC the same way I do, say, about a root canal: necessary but a lousy way to spend a few days.

It’s required because ‘business’ gets done.

It’s lousy because the field is filled with over-testosteroned macho-posturing swaggerers who all seem to come, cookie-cuttered, one like another, all from the same t-shirt store, all from the same barber college... All of whom seem to have confused the ability to describe gore-fests and ass-kicking with horror writing. Basically a squall of post-frat, pre-angst middle aged boys sniffing for each other like those little black and white plastic dogs with magnets in their noses.

And that’s just the women!

But this one -- WHC 2006 -- this one left me hopeful. Maybe I mingled more than usual (holy hell, maybe I really AM a self-important asshole?) and actually talked to people outside of the panels I was on or hung out with some after my reading or had grub with strangers, but I looked into some eyes and actually listened to some voices.

I found quite a few remarkably literate people, a whole coterie of writers who were saying something within their work, who seemed concerned with craft and style.

There always were a few, of course, people I tended to hang with: P.D. Cacek, 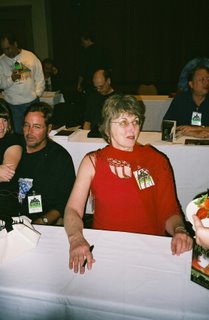 Wayne Allen Sallee, David Thomas Lord, Gene Wolfe (of course! but who, alas, wasn’t in San Francisco), Peter Straub (who, thankfully, was) and others. Good writers, good people all! I also made the acquaintance of one Adam Golaski, an exceptional writer whom I had met briefly at an earlier WHC. I recommend that people search him out and read him. Adam also publishes an annual anthology-magazine, “New Genre” that contains some of the best material – both essay and fiction – from the field that I’ve read in quite a while.

That picture, by the way, is P.D. (Trish) Cacek. She's an old chum and a truly wonderful writer. And NOT one of the boys.

Another guy is William Jones, editor and publisher of the excellent magazine, “Book of Dark Wisdom.” William is another who seems to give a damn about good writing in addition to the usual! His Lovecraftian anthology, “Horrors Beyond,” has some elegant and subtle work in a sub-genre that’s usually rife with faux sensitivity and epic pretention.

There were others. The artist, Alan Clark was there. 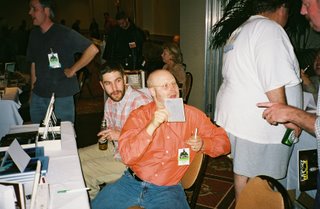 He's the one who did the cover illustration for my book, "Just North of Nowhere.

I’ll be back to this matter in a few days. Right now, I’ve got a book to finish writing and a field to re-think!
Posted by Larry Santoro at 2:10 PM

Phew! Glad you didn't really fall off the planet.
That would also explain the absence/silence of Wayne as well.
Glad to hear you had a positive experience this time.
I've had, over the years, several boyfriends that wanted to drag me to GameCons or SCA events, but I politely declined.
Not a big fan of crowd scenes, and especially not when I merely pop a toe in the waters of the genres involved.
Now, the fact that you met/know/saw/rubbed elbows with Peter Straub - ! Wow.

Actually, Mel, Peter and I have been rubbing elbows for years. He's a very good guy and among the best writers in the field.